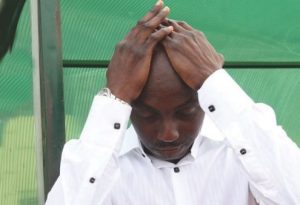 Former Super Eagles Coach, Samson Siasia has called out to well-meaning Nigerians to assist him with donations that will enable him to appeal the life ban imposed on him by the world football federal (FIFA).

Naija News learnt that the former super eagles player made the appeal after he voiced out that he had only been able to raise only $275 (about N100,000) despite the fact that he needs at least N90 million (about $249,000) in legal costs to fight the ban.

In the short video, the former Nigeria coach said;

“Good day Nigerians, my name is Samson Siasia. I am coming to you at a very difficult time in my life and career. I need to raise the sum of 250,000 euros. That’s a lot of money. So l am appealing to all well-meaning Nigerians, the sports-loving Nigerians to come to my aid for me to use these funds to defend myself against FIFA. We have this calculation, if 200,000 people can give 500 naira each, we could be able to reach our target. I wanna thank you as you do this. God bless you”.

This online news platform recalls that  The former football striker was banned for life from participating in all football match by the world football governing body, FIFA in 2019 after he was found guilty of accepting bribes in order to manipulate matches.

Reacting to this, the former Nigeria coach filed an appeal with FIFA and the Court of Arbitration for Sport against the life ban.

Siasia decided to reach out to Nigerians to help him raise funds so he can be able to defend himself and hopefully overturn the lifetime ban placed on him by the world football governing body.