A Facebook user has shared the story of how a man was caught while trying to leave with a hotel’s Plasma TV in his bag after checking in.

According to the user, the man had other keys to other hotel rooms with him at the time he was caught.

What the user shared below:

“This guy came to kyabiz hotel mkd, Gboko road to steal this plasma TV but unfortunately we caught him.this should be a warning to other hotels, this ppl are not joking oooo. While he was caught he had keys to other hotel rooms, should incase you have a missing Tv in your hotel check E division.”

What the user posted: 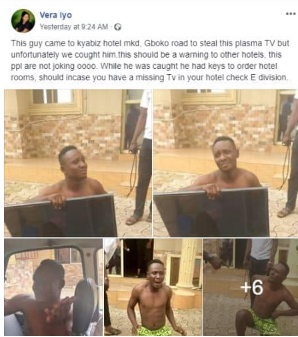 The post Man Caught While Trying To Escape With Hotel’s Plasma TV In His Bag appeared first on Information Nigeria.