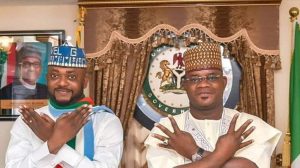 The executive Governor of Kogi State, Yahaya Bello, who was the governorship candidate of the All Progressives Congress in the governorship election in the state has been sworn in for another term in office.

The inauguration ceremony of the Governor and his Deputy, Edward David Onaja was conducted in Lokoja, the state capital on Monday, 27th January.

The Chief Justice of the state, Nasir Ajana, swore-in Governor Bello and his running mate in the November 2019 election, Onoja.

The event was attended by the governor of Ondo State, Rotimi Akeredolu, the governor of Kwara State, Abdulrahman Abdulrazaq, Edo State governor, Godwin Obeseki, the National Chairman of the All Progressives Congress, Adams Oshiomhole.

President Muhammadu Buhari was represented by the minister of youth and sports development, Sunday Dare, while other top government officials were at the event.