I Only Want Things Others Can’t See – Brymo

Nigerian singer Brymo has opened up on why he is antisocial.

According to the singer, this has to do with how he grew up, revealing he was in the hospital the day he was to be given a name by his parents.

Read Also: I have only ever spent N20,000 of my money since I began singing – Brymo

He added that he is an only child who somehow took pleasure in spending time alone.

‘I can be quite the antisocial; I was still at the hospital on my naming day, and my parents had to pick themselves over their families, and so I spent most of my childhood with only both of them, I’m an only child.. and a lefty.. I want only the things others don’t see.’ 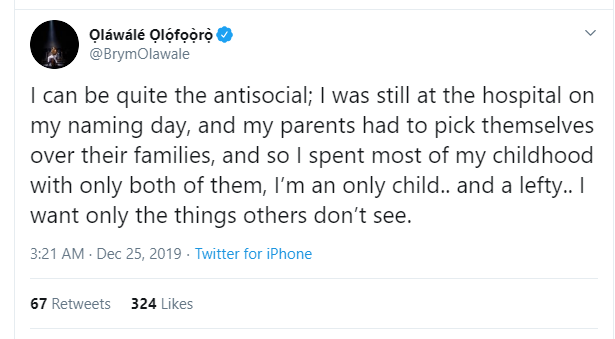 The post I Only Want Things Others Can’t See – Brymo appeared first on Information Nigeria.