The duo of Nollywood actor, Alex Ekubo, and owner of Triple Mg record label, Ubi Franklin, are currently trolling each other on social media.

It all began with Ubi Franklin sharing a message on his Instagram page that says fans should not let motivational speakers put them into trouble.

Alex in his reaction to the comment via the comment section pointed out that Ubi Franklin, the writer of the post, is actually the chief pilot of the subject matter.

This has prompted a reply from Ubi who said, he is disgusted at what the Nollywood actor commented.

See screenshots of their exchange below: 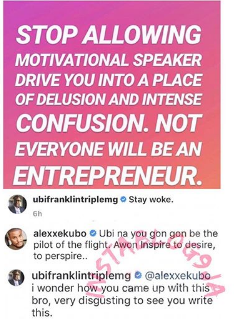 The post ”I Am Disgusted At Your Comment” – Ubi Franklin Fires Back At Alexx Ekubo appeared first on Information Nigeria.