Harrysong Shades Timaya As He Flaunts His N11m Jacket (Photo)

Popular singer, Harrysong has thrown a subtle shade at Timaya by flaunting his jacket which he claims costs 23 000 pounds which translates to 11 million Naira in local currency.

Recall that Timaya has been trending on social media in the last couple of days over a comment that fellow celebrities are fond of wearing fake designers.

Harrysong while taking to his Instagram page on Monday shared a photo of his expensive jacket and added that he would have made noise about it but he remembers that Davido wears a more expensive one.

Read Also: Off to AMERICA to charge my phone; Timaya Says As He Releases Photo

He then concluded by saying he would wear a N50k shirt from his tailor tomorrow adding that it does not matter to anybody.

This jacket cost 2300 pounds, I for make noise but I remember say @davidoofficial wear shirt of 5,000 pounds & he no make noise. Tomorrow I go wear 50k shirt from my tailor, na my body
Be humble, remember your roots 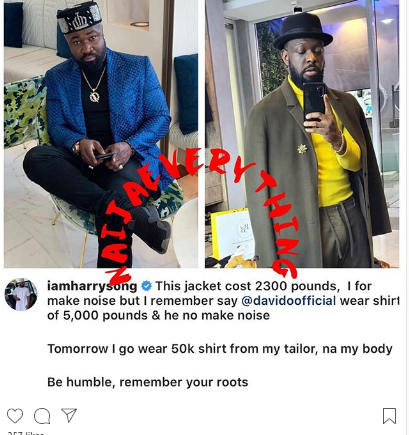