Nobel Igwe, the chief executive officer(CEO) of 360 groups has sent out a strong message to Igbos as regards their wives during the Christmas season.

According to the popular figure, Igbo men like to use the Christmas period to show that their wives can cook very well.

However, he said nobody is doubting the abilities of the wives and added that their wives also deserve to enjoy the Christmas season instead of being locked down in the kitchen all day.

Using himself as an example, he said he grew up watching his mum live in the kitchen on Christmas day because visitors won’t stop coming on the day.

However, he said it is time to change the narrative. 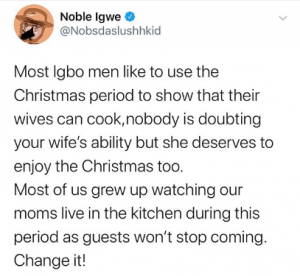