Edward Okechukwu, the Vice Chairman of the All Progressives Congress in Ward 5, Oyigbo Local Government Area of Rivers State, has reportedly been killed by gunmen in the early hours of Monday, August 20th.

According to a Facebook user who shared the news on his social media page, Okechukwu who is also the son of the paramount ruler of Azuogu Ndoki community was killed alongside four other men of the community.

The gunmen were also said to have carted away valuables after his demise.

Read the full story below: 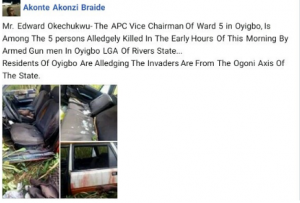