Actress Bukola Adeeyo has reportedly stormed out of a movie location after her gold chain which she said costs 600k was stolen while on set.

According to reports, she was said to have angrily left the movie location without finishing the job at hand.

Shortly after she left the movie location, she took to her Instastory to share that she wants her chain back.

Bukola Adeeyo is more prominent on the Yoruba movie scene and she has featured in several of such movies.

See what she posted below: 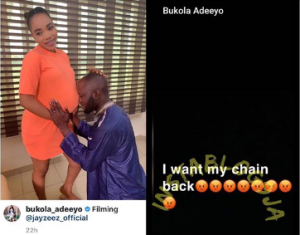 The post Actress Bukola Adeeyo Storms Out Of Movie Set After Her 600k Chain Was Stolen appeared first on Information Nigeria.